The building used for investigating the problems of art historian-safe building documentation and for exemplifying possible solutions was the Haseschachtgebäude in Osnabrück, a historical building from the peak of the coal-mining era in Osnabrück in the late eighteen hundreds, now run by the museum of industrial culture (cf. Figure. 1).
The building itself is a typical example of the rich regional industrial architecture of the time. It was housing the winding tower for accessing coal-mining shafts below, which can still be accessed today and are part of the site to be documented, as can be seen in the 3D site model in the rendering (cf. Figure. 2).

Constituents of the Developed Concept

In addition, the concept study has resulted in a perspective for curating the data, making it freely available, including other historical material about the buildings (e.g., historical plans and photos), and re-working it for pedagogical purposes (e.g., museum pedagogics, academic teaching). Future funding permitting, we will run a full project demonstrating all this, again by example of the Haseschachtgebäude, in a joint project involving more partners bringing together the research and professional background for addressing all these tasks.

Renderings of 3D Point Clouds of the Haseschachtgebäude in Osnabrück 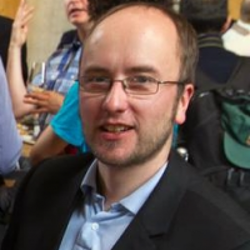